Making More of Your patterns – A Sleeveless kate Dress

KATE IS JUST THE MOST PERFECT DRESS FOR HOT WEATHER AS IT’S INFINITELY HACKABLE. THIS IS HOW YOU CAN ADAPT THE PATTERN TO MAKE A SLEEVELESS VERSION JUST RIGHT FOR THE LONG HOT SUMMER DAYS. 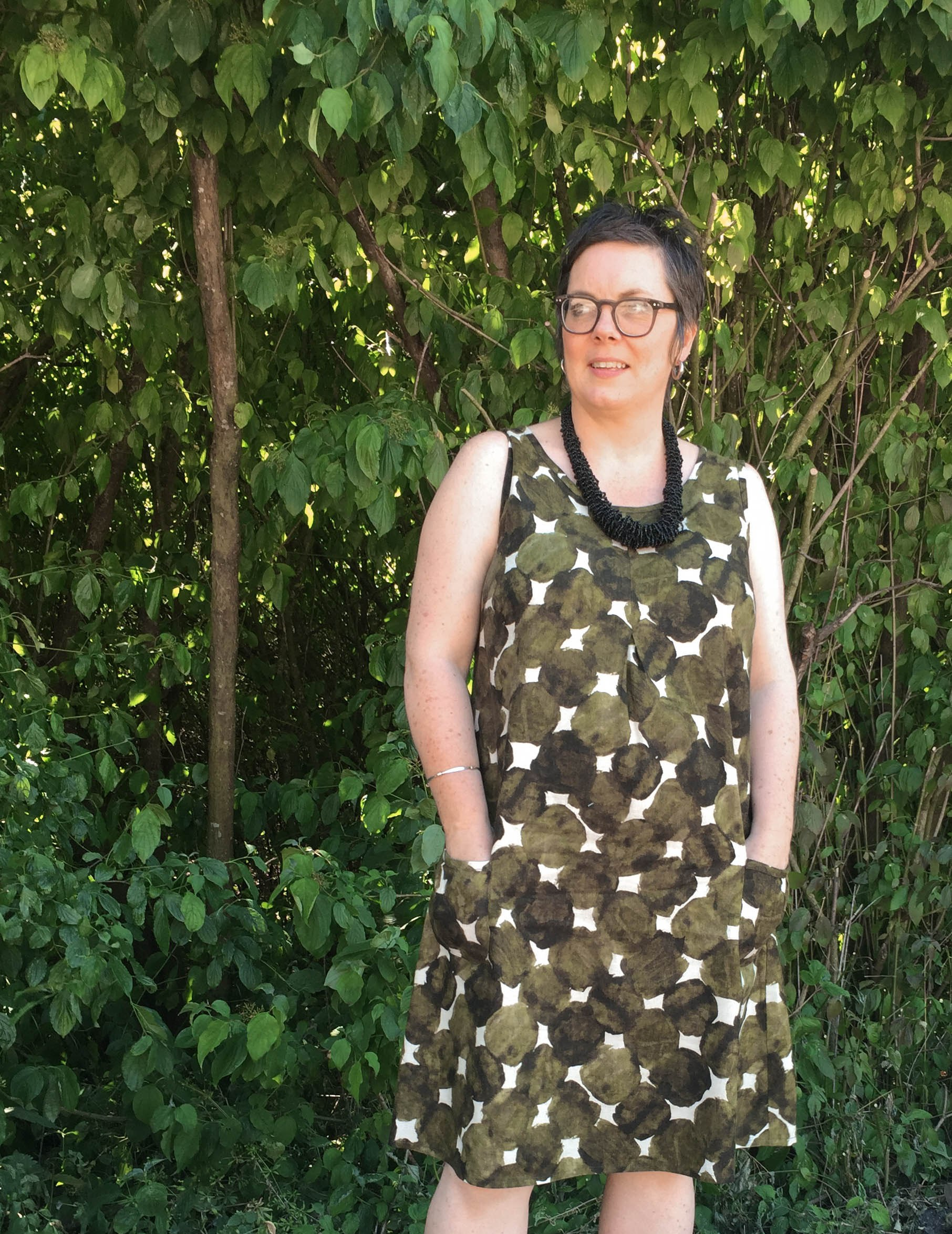 The pattern needs a little bit of tweaking as the armholes are designed to take a sleeve.

It is important to first draw on the seam allowances around the armholes and across the shoulders. This makes it easier to see where and how the alterations need to be made. 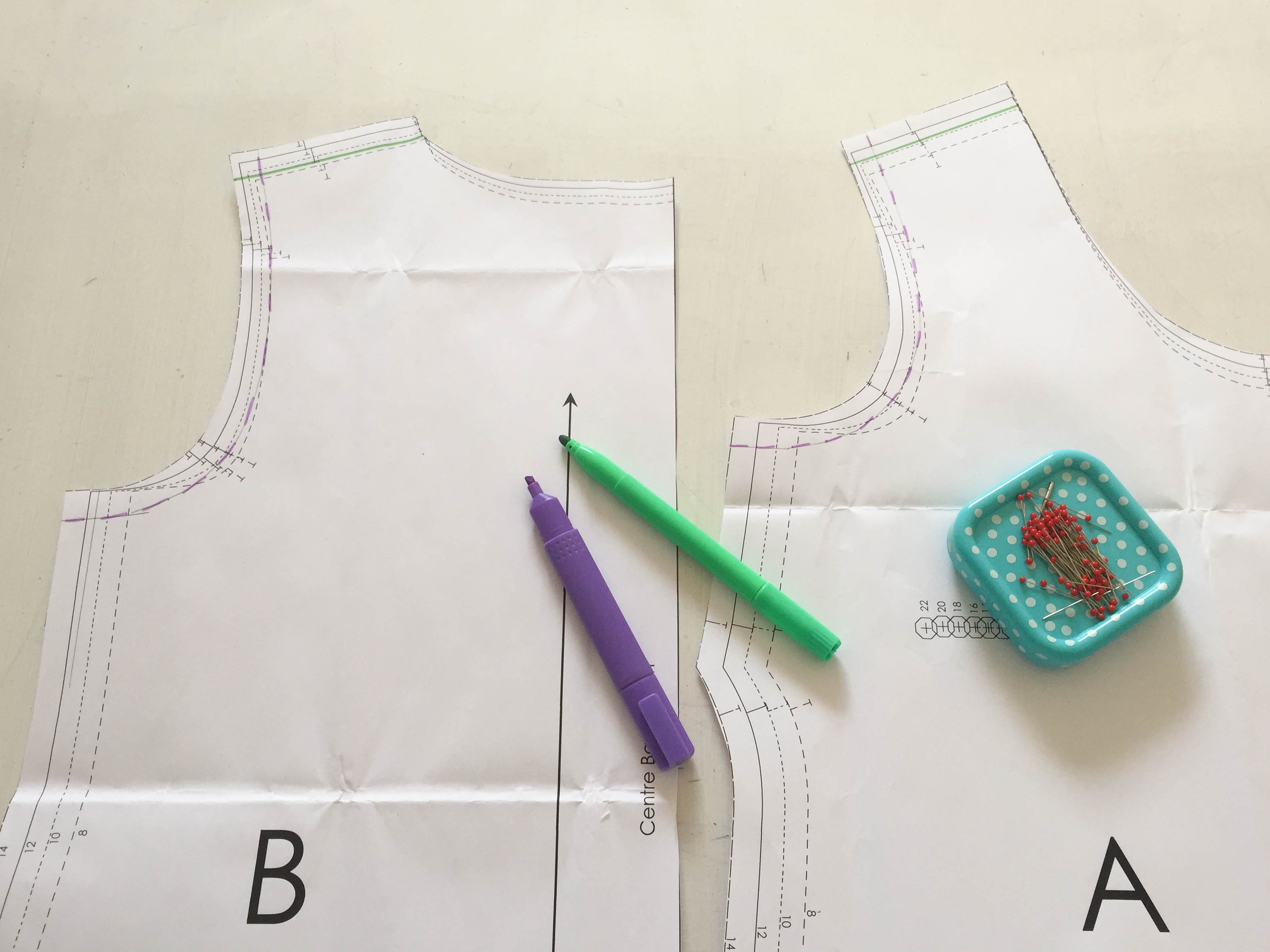 The shoulder point on the pattern needs to be brought in slightly so the arm hole sits better over the ball of the shoulder.

Match up the shoulder seams to make sure that both the armhole and neckline alterations are nice smooth flowing curves.

You can widen the neckline slightly as this gives a more flattering shape with no sleeves, but the choice is yours. In this case I made a mark 1.5cm in from the neck edge and then redrew the neckline curve blending it in to the original line. 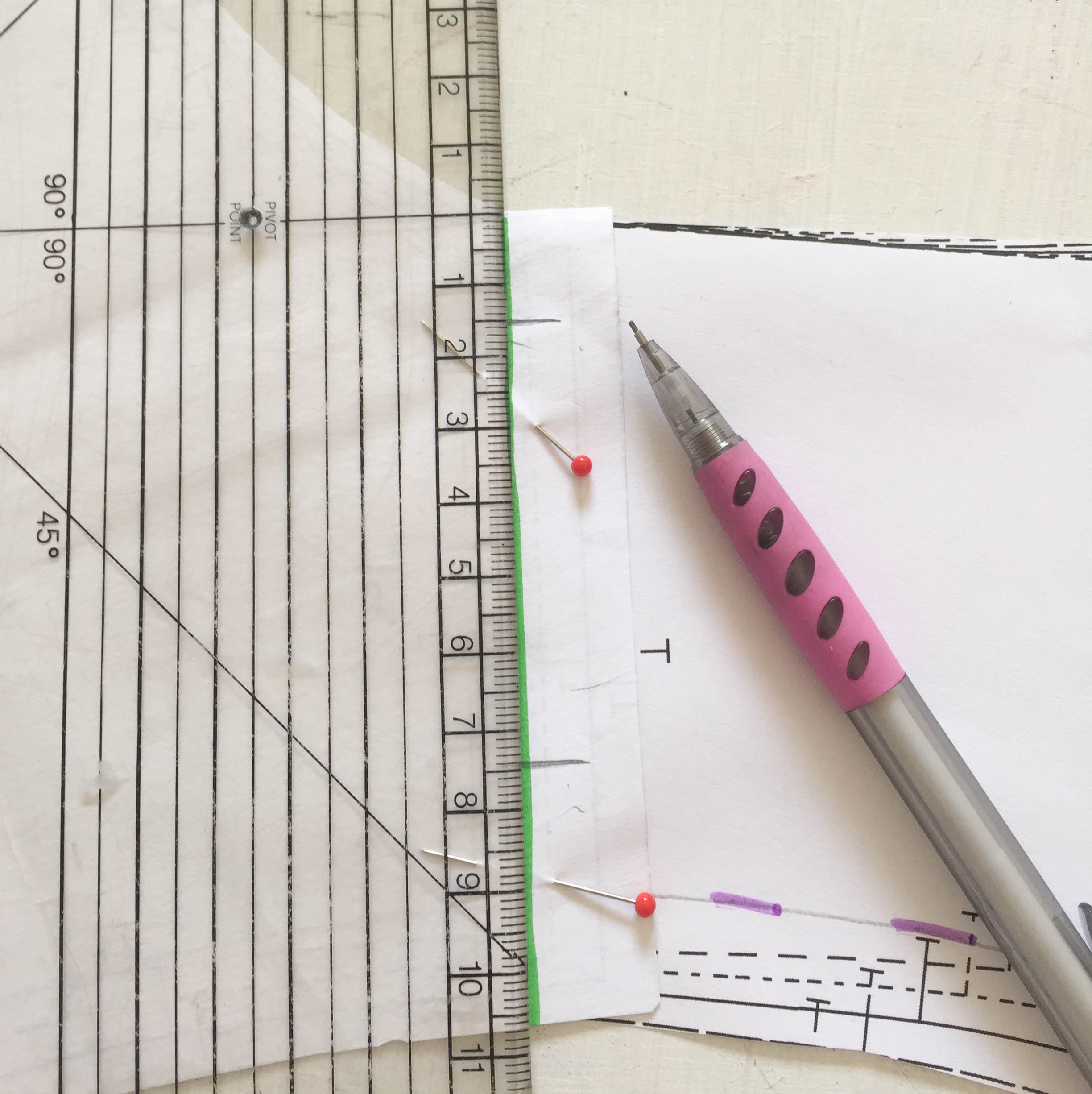 The shoulder point was moved in by 3cm. This is going to be an open armhole so the underarm point may need to be raised as well, to prevent too much gaping at the base of the armhole. 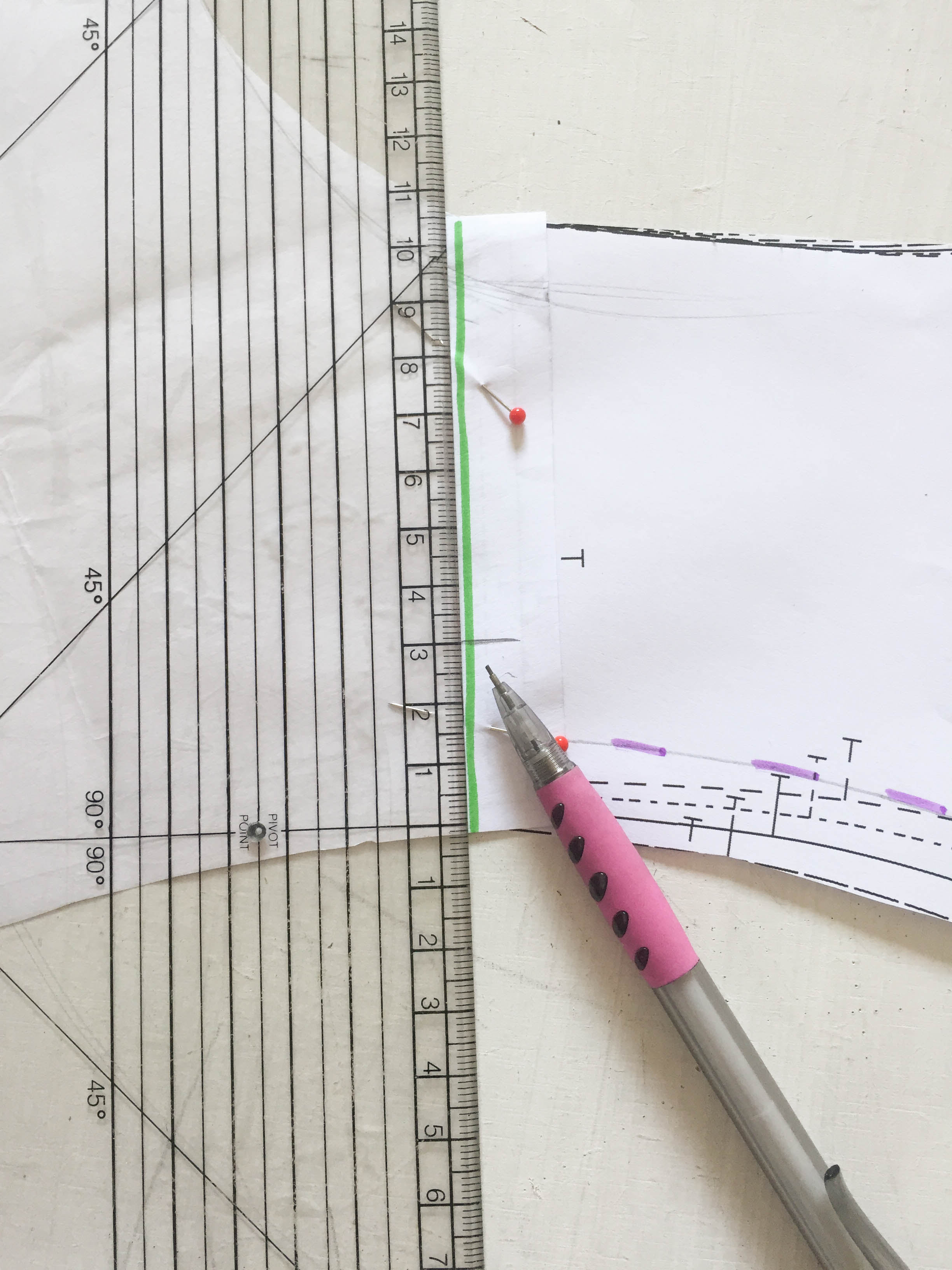 The underarm point was raised by 1.5cm so it was level with the cut edge of the pattern piece, then the armhole was re-drawn from the raised armhole point on the front to the new shoulder point, and around to the back underarm point. 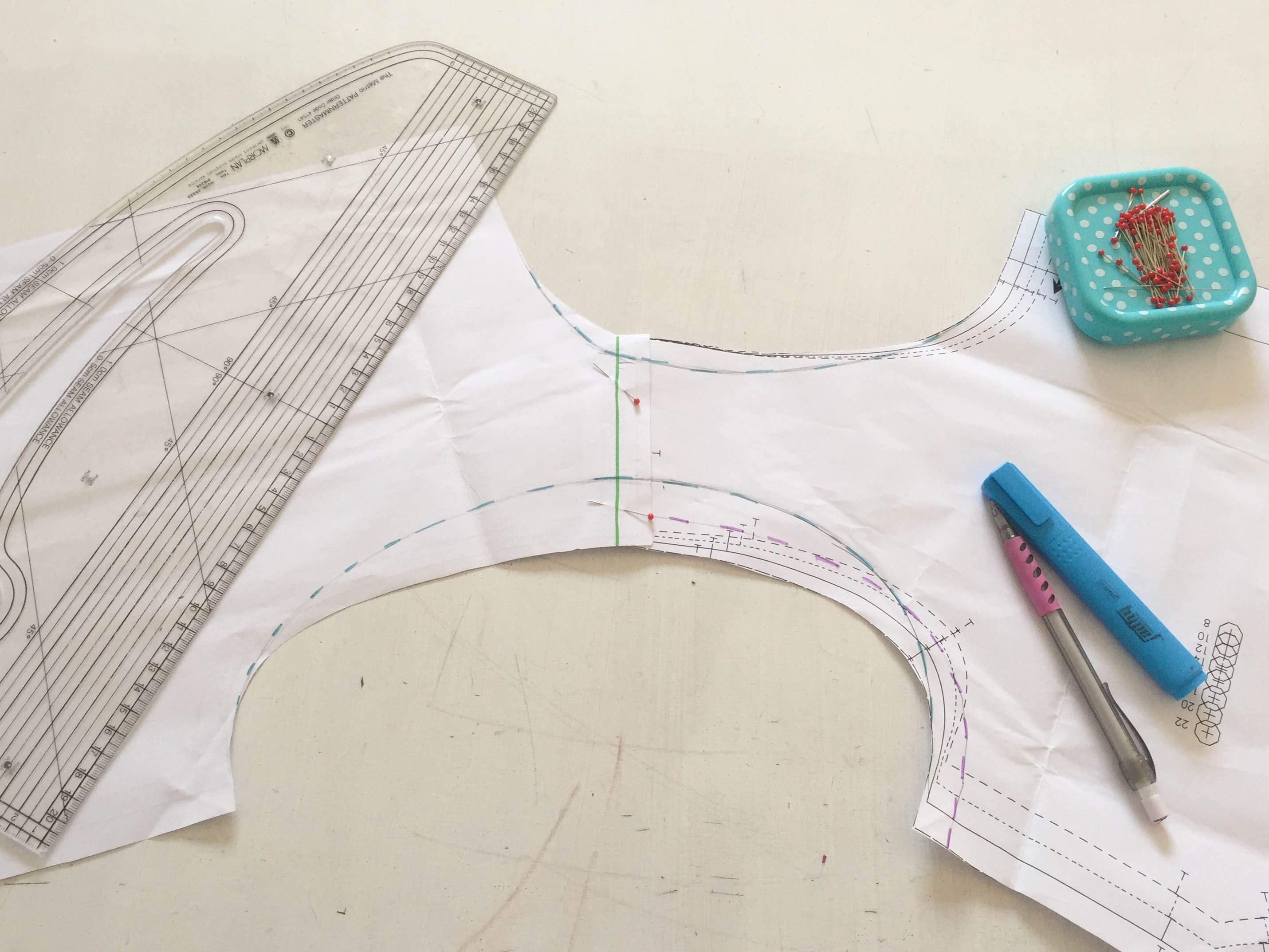 Cut through the pattern along the new armhole and neckline while the paper was still pinned together to make sure the lines followed true.

For this dress I also lengthen the pattern by 10cm to make it more dress length than tunic length. I did this directly on to the fabric as I pinned out the pattern pieces But you can slowly add on extra paper and mark it on to the pattern first.

The Kate Dress has two options for the front of the dress. Plain and simple or with a bit of gathering at the centre front neckline. 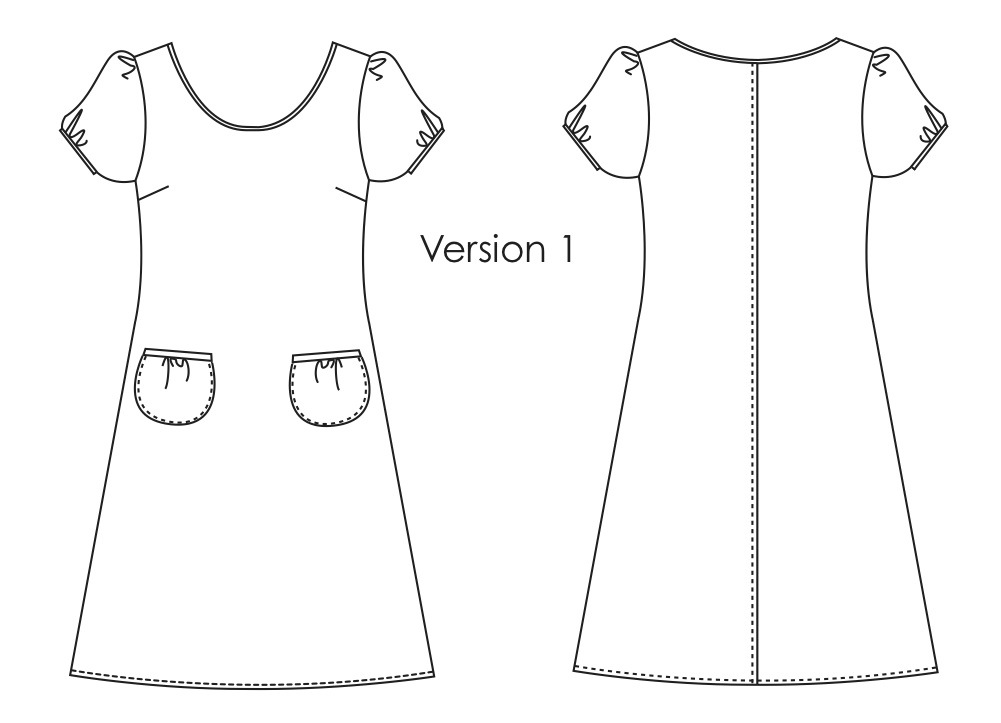 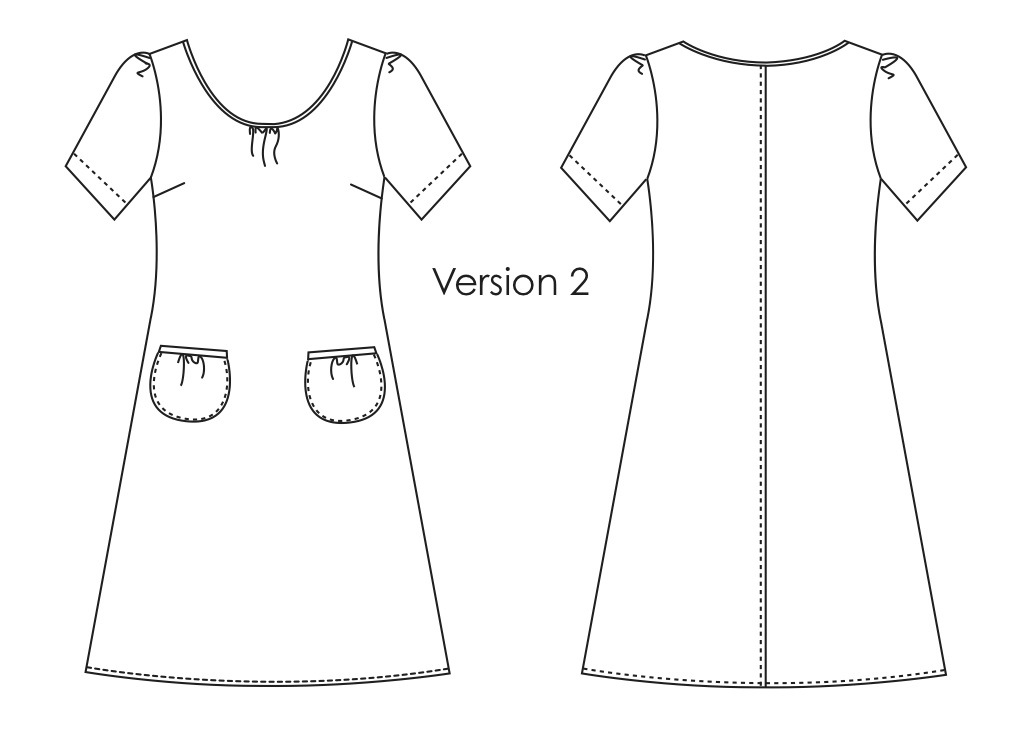 Gathers are a form of ‘suppression’ and like their confederates; pleats, tucks and darts, basically just suppress the extra fabric to create a 3D shape. They can be interchangeable too.

For this dress I wanted a flatter finish at the neckline but to keep that bit of extra fullness in the fabric. So I turned the gathers into an inverted box pleat, a bit like the one I created in the Woven Peaseblossom Hack 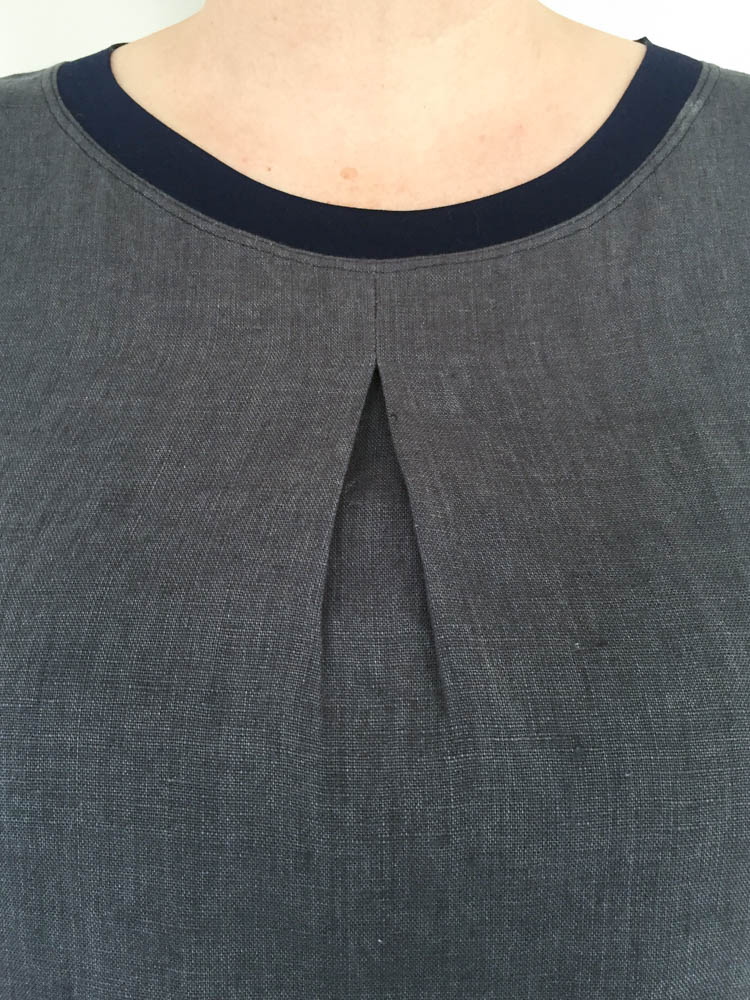 An inverted box pleat on the woven Peaseblossom

The additional fabric is marked on the Front pattern piece and I marked this onto the fabric. 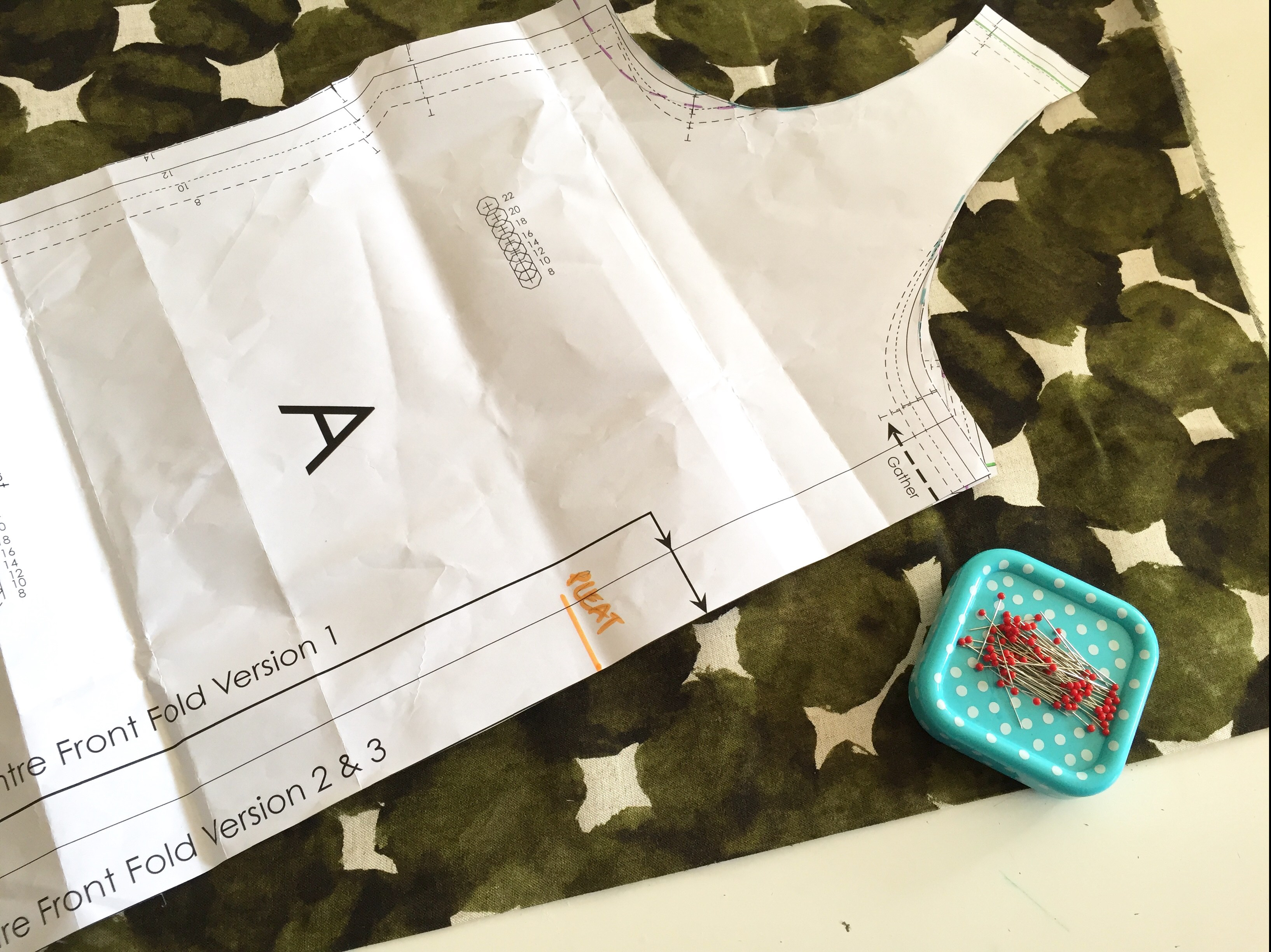 I measured down 20cm as I wanted the opening of the pleat to be just below bust level, and marked this as the base of the pleat. Sew along the new pleat line and then press the pleat open evenly to create the inverted box shape. 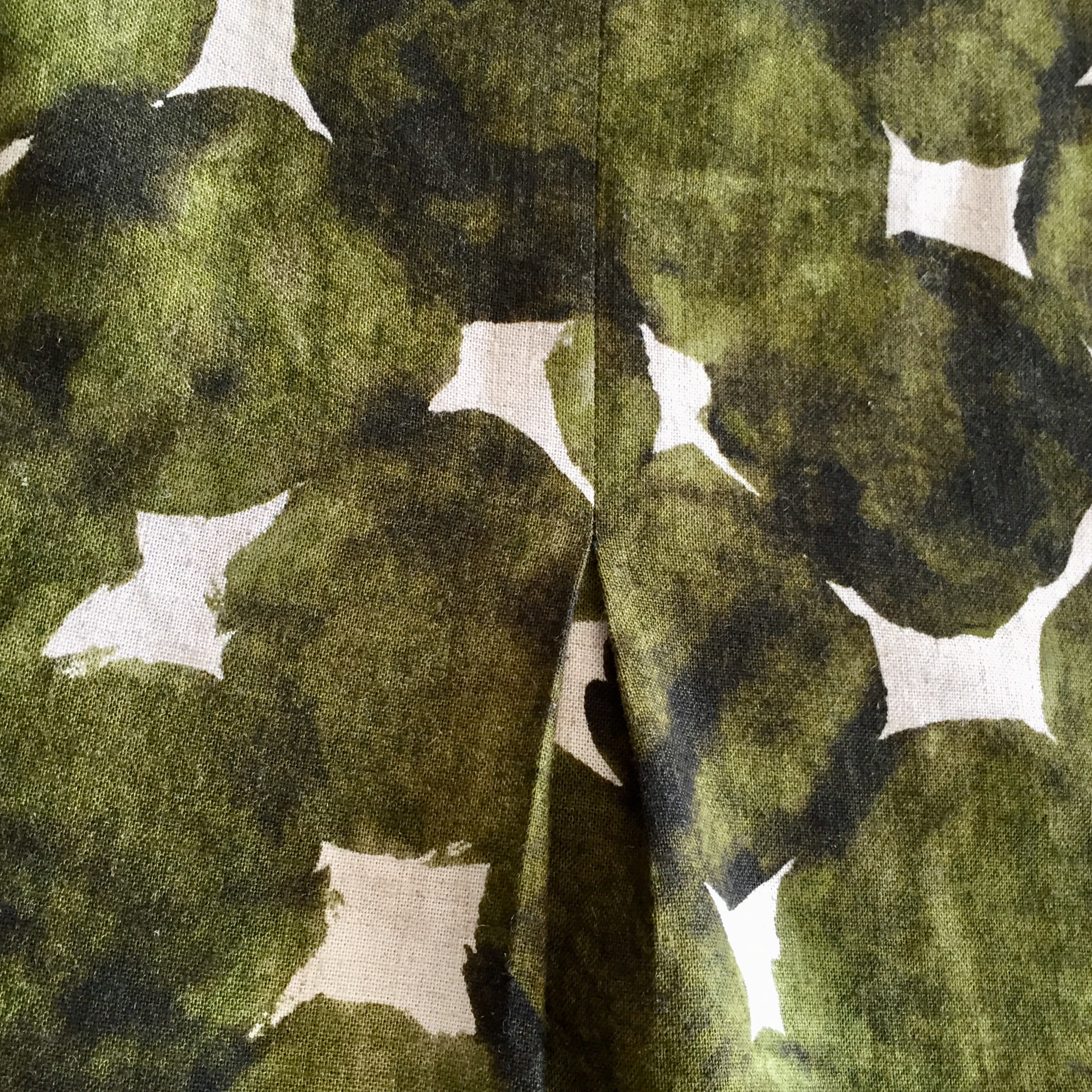 It can be a little bit fiddly doing it on one this little but it’s worth getting it neat.

The rest of the dress was made up in exactly the same way as a normal Kate Dress. The pockets were bound across the top edge and sewn in place. 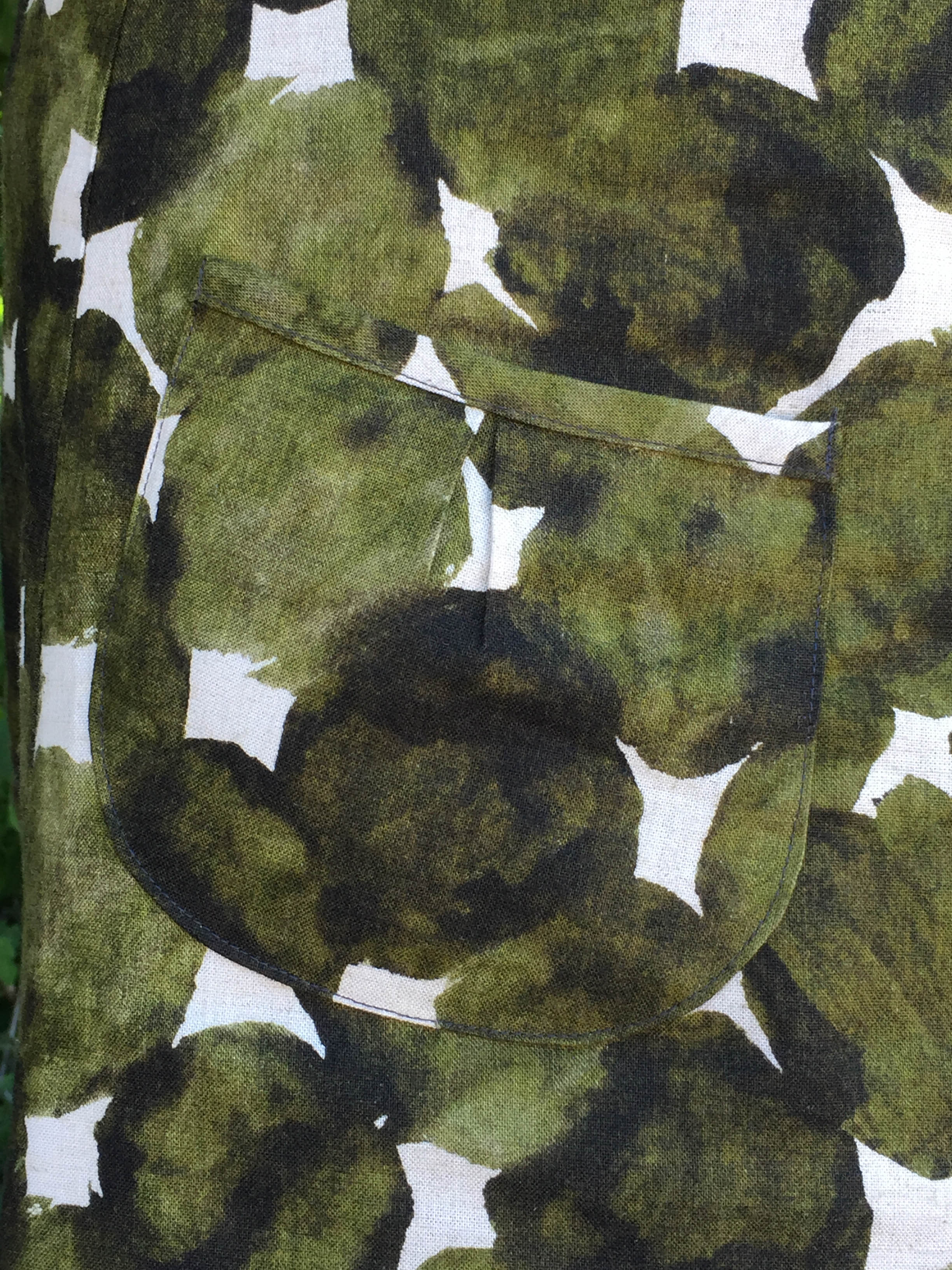 I know you can hardly see the pockets here, no contrasting top-stitching this time.

The armholes were finished in the same way as the neckline. I measured the armhole first to work out how much bias binding I would need. 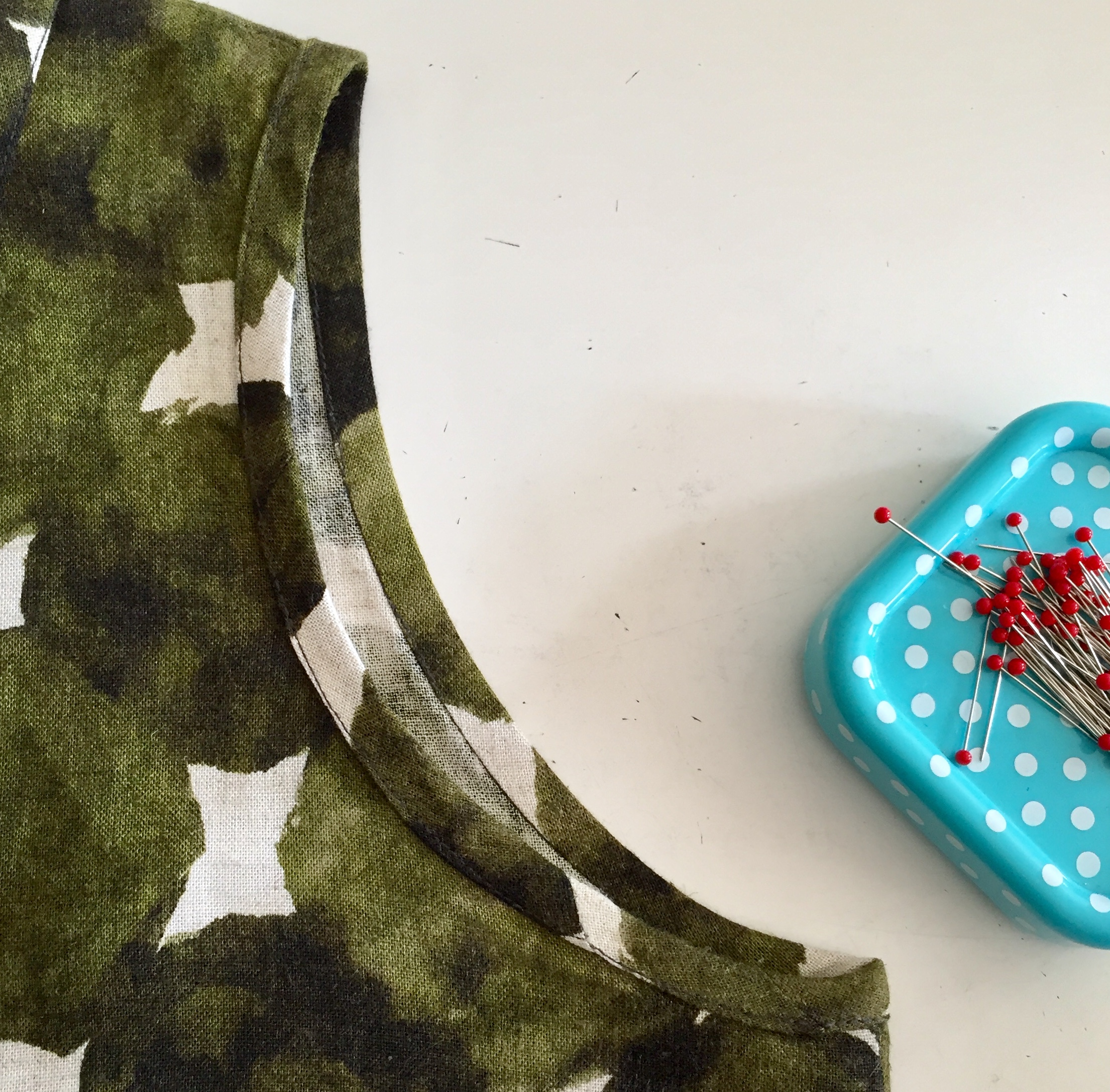 I used a visible binding finish, to matched the neckline. And it was sewn in exactly the same way as the neckline and pockets. I used the method from the How to Join Bias Binding to neaten and join the bias around the armhole.

This is a simple and easy pattern hack to do. I hope you give it a go and make several Kates for the Summer. 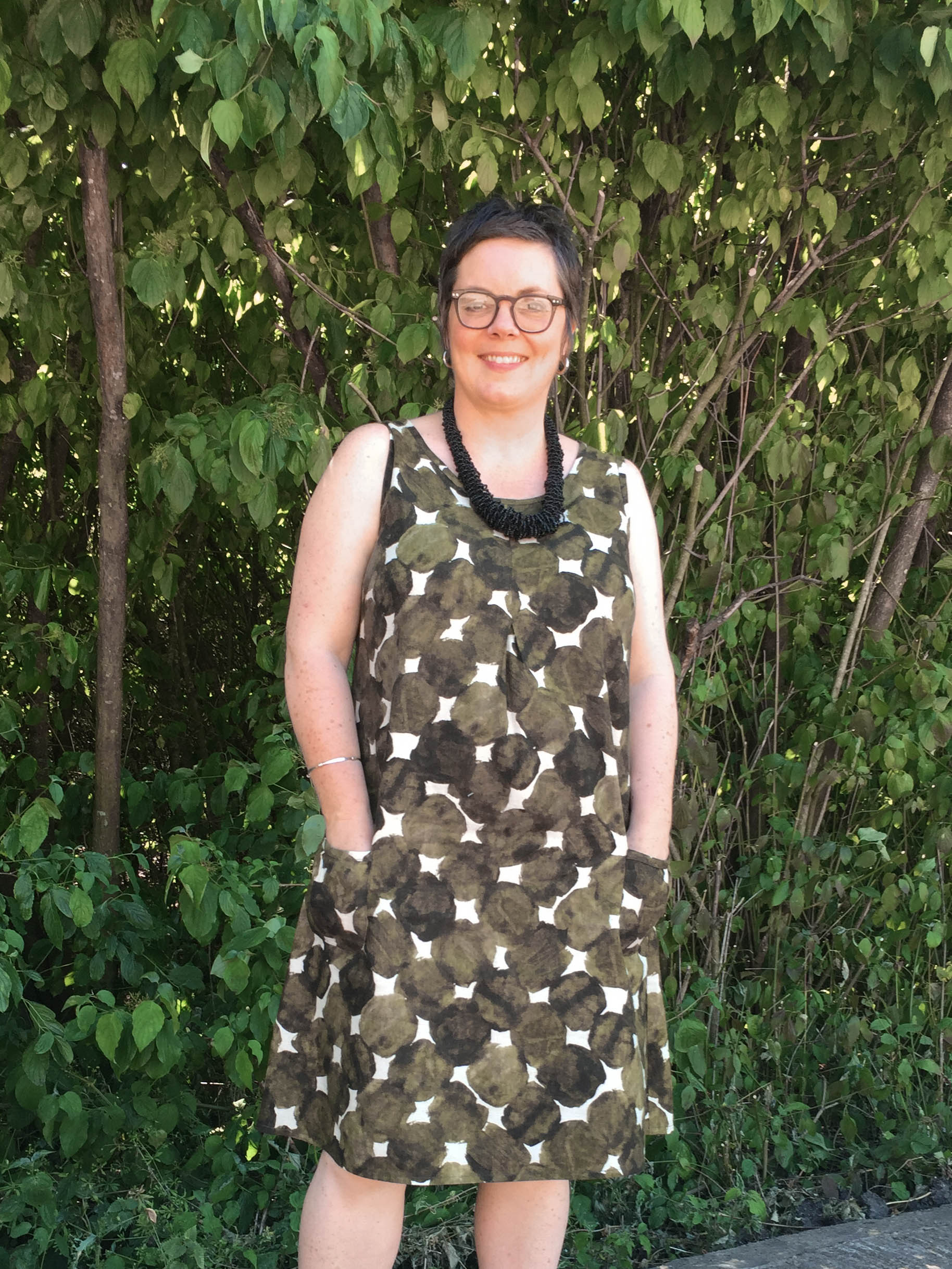